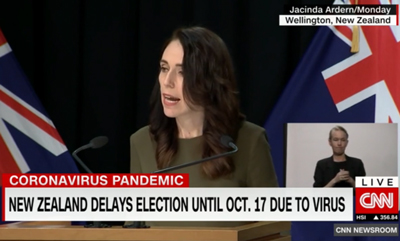 Auckland (CNN) - New Zealand Prime Minister Jacinda Ardern says she is delaying the country's parliamentary election by four weeks to October 17 after the reemergence of Covid-19 in the country last week.

The announcement on Tuesday that locally acquired cases of coronavirus had been confirmed in the New Zealand's biggest city, Auckland, prompted the government to introduce strict level three lockdown measures on August 12. This comes after around 100 days without community spread.

The rest of the country was put into level two lockdown, with both lockdown periods extended until at least August 26 as further cases of coronavirus were confirmed.

The general election was due to take place on September 19, with Parliament rising on August 6 and campaigning had already begun before the lockdowns were introduced.

But at a live-streamed media conference Monday, Ardern said it was clear "the reemergence of Covid in Auckland at the beginning of the formal campaign period has been cause for concern."

Ardern said that New Zealand's Electoral Commission had assured her that a safe and accessible election would be possible on the new date.  Read more >>
Posted by Anthony Derek Catalano at 5:21 AM