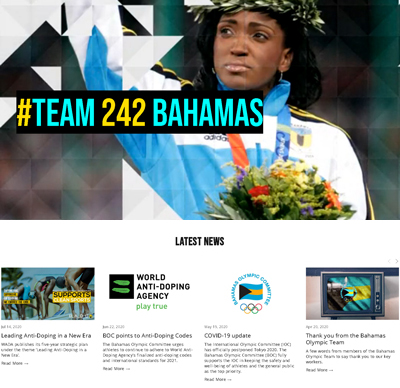 BOC President Romell Knowles pointed out that BahamasOlympicCommittee.org was in need of an overhaul, as the original website was more than a decade old.

The revamped website features a modern look and enlists a series of technology tools to advance Olympism in The Bahamas.

“We are attempting to make use of the type of media that a modern audience demands,” said Knowles.

“So people who visit the site will notice that it is rich in graphics and other audio/visual media.

“We need to remain progressive in advancing our messages, which will give the athletes the messages they need and the platform they deserve in order to meet their goals.

“Finally, we are doing this to make it easier for the entire nation to follow Team Bahamas because every single person has a part to play in our national success.”

Through an agreement with the International Olympic Committee, a feed from the Olympic Channel has a permanent home on the latest version of the BOC’s website.

Year-round, 24 hours per day, viewers are able to tune in to the Olympic Channel through the Bahamas-based website.  Read more >>
Posted by Anthony Derek Catalano at 7:31 AM