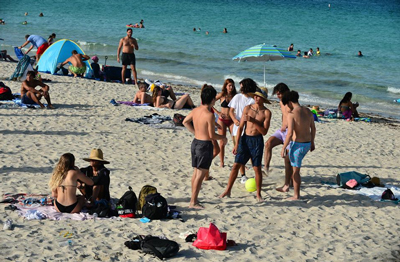 Beach-goers are seen on the beach after a mandate to wear face masks in public spaces went into effect on Tuesday June 30, 2020 in Miami Beach, Florida. (Photo by Johnny Louis/Getty Images) Getty Images

Florida set a new daily record for coronavirus deaths on Tuesday, as deaths continue to climb while more young people are losing their lives to the virus, an analysis released Tuesday found.

More residents in the 25-44 age group died during the month of July than in the four previous months combined, according to the analysis, and there were more deaths in July from those under the age of 65 than those over 90.  Read more >>
Posted by Anthony Derek Catalano at 7:07 AM