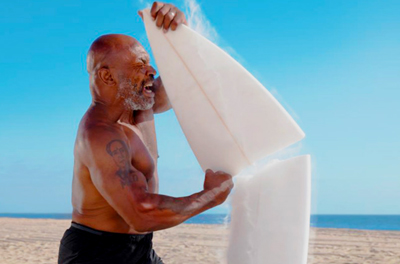 Grand Bahama’s vast marine life and natural beauty will be on full display when Discovery Channel’s Shark Week, one of television’s most anticipated summer events, kicks off on Sunday, August 9.

This year, Shark Week will feature over 20 hours of programming, but the main event happens on Sunday night, when legendary boxer Mike Tyson takes on one of the ocean’s apex predators in our Grand Bahamian waters during the Tyson vs. Jaws: Rumble on the Reef special.

“That’s right, the heavyweight champ is kicking off the most wonderful week of the year by throwing his hat in the underwater ring,” Discovery Channel said in a statement.

“With famed ring announcer Michael Buffer calling the shots, these two heavyweights will square off underwater, where Mike Tyson will try to score a TKO over the massive shark. And don’t worry, no sharks were harmed (or bitten) in the making of this episode,” the statement ensured.

The one-hour program will showcase Tyson’s experience scuba diving with lemon sharks, reef sharks and tiger sharks in the waters of Shark Junction and Tiger Beach off Grand Bahama.

Tyson vs. Jaws: Rumble on the Reef airs at 9:00 p.m. on August 9 on Discovery Channel. Shark Week 2020 will continue through August 16 with incredible shark stories, survivor tales, scientific expeditions and celebrity appearances from Will Smith, Snoop Dogg and Shaquille O’Neal.  (source)
Posted by Anthony Derek Catalano at 5:59 AM