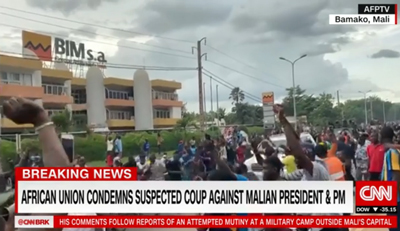 (CNN)Troops in Mali have arrested the country's President Ibrahim Boubacar Keita and Prime Minister Boubou Cisse in a suspected coup, according to the chairman of the African Union.

Moussa Faki Mahamat condemned news of the arrests, in a tweet posted Tuesday.
"I strongly condemn the arrest of President Ibrahim Boubacar Keita, the Prime Minister and other members of the Malian Government and call for their immediate release," Mahamat wrote.

He added that he called on "the mutineers to cease all use of violence," and asked the international community to oppose any use of force.  Read more >>
Posted by Anthony Derek Catalano at 6:32 PM