The Islands of The Bahamas will welcome the Series’ best players, with PGA TOUR playing opportunities on the line. 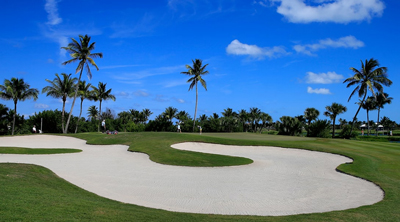 Tom Weiskopf began the design and construction of the course in 1999, with the Ocean Club Golf Course opening in January 2001. (Getty Images)

PARADISE ISLAND, Bahamas—The PGA TOUR announced Tuesday that the Ocean Club Golf Course at Atlantis Paradise Island Bahamas will be the host site of the LOCALiQ Series Championship, the season-ending event of the LOCALiQ Series. The tournament, scheduled for October 26-30, will also be the culmination of a new Order of Merit points race—the Race to The Bahamas Points Standings—that The Bahamas Ministry of Tourism is sponsoring.

In July, the TOUR announced the formation of the LOCALiQ Series, a set of eight tournaments for members of PGA TOUR Latinoamérica, the Mackenzie Tour – PGA TOUR Canada and PGA TOUR Series-China who have been sidelined this year because of the COVID-19 pandemic. The season begins this week in Alpharetta, Ga., with the Alpharetta Classic.

After the first seven events, the top-78 eligible players on the Race to The Bahamas Points Standings will earn the right to play the 72-hole season-ending event at one of the most beautiful resort courses in the world. The winner of the LOCALiQ Series Championship at Atlantis Paradise Island Bahamas earns a sponsor exemption into a to-be-determined PGA TOUR event, while those players finishing first and second on the Race to The Bahamas Point Standings also receiving a PGA TOUR tournament invitation via a sponsor exemption.  Read more >>
Posted by Anthony Derek Catalano at 5:26 AM