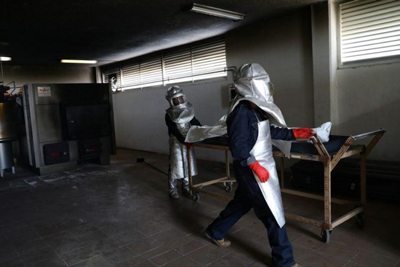 Crematory workers are pictured next to a body bag containing the body of Lorenzo who died of the coronavirus disease (COVID-19) at a crematory in Mexico City in Mexico, August 2, 2020. REUTERS/Edgard Garrido

The region, which topped 200,000 deaths on Saturday, has struggled to stall the spread of the novel coronavirus, with infections picking up pace in many countries even as governments look to ease lockdowns and revive economic growth.

Latin America, which has some 8% of the world’s population, accounts for close to 30% of global cases and fatalities, with infections still spreading fast and hitting regional leaders like Brazil’s Jair Bolsonaro and Bolivia’s Jeanine Anez.

Colombia in the last week passed 300,000 cases and 10,000 fatalities. Argentina, which had early success slowing the spread of the virus, has seen a recent spike in infections. Five Latin American countries are now in the global top 10 for cases, according to a Reuters tally.

Brazil, the worst hit country in the region and the second-worst worldwide, has over 2.73 million cases and more than 94,000 deaths.  Read more >>
Posted by Anthony Derek Catalano at 1:54 PM