Juan Carlos I, Spain's former king, has left the country amid scrutiny of alleged financial dealings 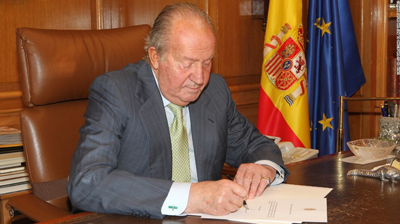 Madrid (CNN) - Spain's former king, Juan Carlos I, who steered the nation from dictatorship to democracy, has left the country amid scrutiny of his alleged financial dealings.

In a letter to his son, King Felipe VI, Juan Carlos wrote that he made the decision to leave "in the face of the public repercussion that certain past events of my private life are generating."

A Royal Household spokesperson told CNN after publication of the letter on Monday that the former monarch "has left already," but declined to reveal where he has gone.

Earlier, his lawyer Javier Sanchez-Junco told CNN that Juan Carlos' move out of Spain was imminent, insisting he didn't know where the former King was headed.

Spanish and international media have reported on the alleged financial dealings of the former King, now 82, even before he abdicated in 2014, and on the efforts of his son to distance himself from his father.  Read more >>
Posted by Anthony Derek Catalano at 1:16 PM