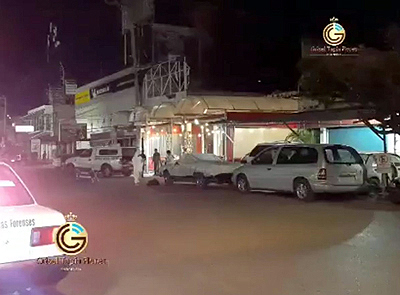 Emergency officials stand outside a bar after gunmen shot dead a journalist early on Sunday in the Mexican city of Iguala in the southwestern state of Guerrero, according to local authorities, August 2, 2020, in this still image taken from video obtained from social media. Mandatory credit GRISEL TAPIA FLORES/via REUTERS

ACAPULCO, Mexico (Reuters) - Gunmen shot dead a journalist early on Sunday in the Mexican city of Iguala in the southwestern state of Guerrero, local authorities said, in what was at least the fourth murder of a reporter in the country this year.

Pablo Morrugares of news website PM Noticias had gone to dine in an Iguala restaurant in the company of a police bodyguard when the unidentified assailants opened fire on them after midnight, Guerrero state prosecutors said in a statement.

The website also published an announcement about the killing on Facebook, as did the human rights commission of Guerrero, which has long been one of Mexico’s most violent states.

Morrugares, who was killed along with his bodyguard, Guerrero state prosecutors said, had survived a previous assassination attempt in 2016, a local official said.

The motive for the shooting was not immediately clear.

According to Reporters Without Borders, a non-profit group dedicated to protecting freedom of information, three other journalists had been killed in Mexico this year.  (source)