Japan PM has hospital check-up amid concerns over possible fatigue 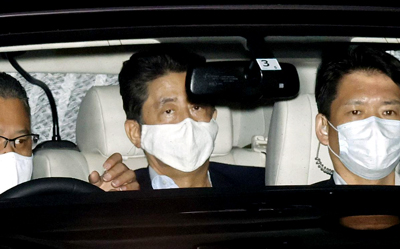 Japanese Prime Minister Shinzo Abe arrives at his residence as he returns from Keio University Hospital in Tokyo, Japan, in this photo taken by Kyodo, August 17, 2020. Mandatory credit Kyodo/via REUTERS

TOKYO (Reuters) - Japanese Prime Minister Shinzo Abe underwent a medical check-up in hospital on Monday, a government source said, amid concern voiced by a top official that the premier could be suffering fatigue from handling the coronavirus pandemic.

The agency quoted a source at Abe’s office as saying “Abe underwent various check-ups since he had the whole day (free) on a weekday”, stressing that nothing was wrong with the prime minister.  Read more >>
Posted by Anthony Derek Catalano at 7:33 AM