Hurricane center monitors system as it turns toward Bahamas 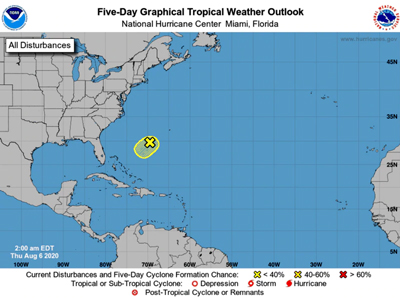 A system in the tropics with low odds of developing is moving southwest toward the Bahamas, the National Hurricane Center said in its 2 a.m. update.

The small, low-pressure system located a few hundred miles southwest of Bermuda is producing disorganized showers and thunderstorms. The low was given a 10% chance of developing into a tropical storm in the next two to five days.

It’s then expected to drift west, southwest toward the Bahamas archipelago.

Development should be slow to occur as dry air and upper-level wind sheer lie in its path and are forecast to cause the system to dissipate over the weekend.

If it doesn’t, it will be the tenth named storm of the year receiving the name Josephine.  Read more >>
Posted by Anthony Derek Catalano at 5:42 AM