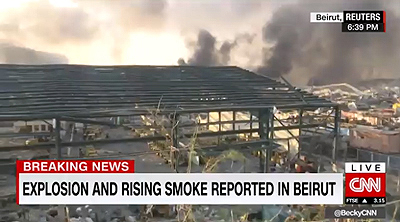 Beirut, Lebanon (CNN) - A massive explosion ripped through central Beirut on Tuesday, injuring hundreds of people and blowing out windows in buildings across the city.

The blast near the port in the Lebanese capital sent up a huge mushroom cloud-shaped shockwave, flipping over cars and damaging buildings miles away.
An "uncountable" number of people were wounded by the blast, the state-run National News Agency reported, and footage from the scene captured the injured staggering through streets in the capital. One eyewitness described the scenes as "like an apocalypse."  Read more >>
Posted by Anthony Derek Catalano at 11:52 AM