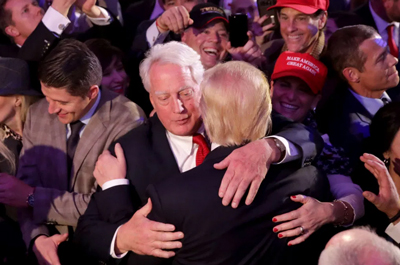 The cause of death for the president's younger brother was not disclosed when it was announced he died. Source: Chip Somodevilla / Getty

Robert Trump, the younger brother of the president, died Saturday at the age of 71. His death came just about 24 hours after it was announced Friday that he had been hospitalized in New York City. But details about Trump’s cause of death did not include how he died — an omission that was seen as glaring to many and quickly gave way to speculation across social media as the nation grapples with the lingering coronavirus pandemic.

The New York Times reported that a family friend said Robert Trump had been taking blood thinners “after a recent fall” caused him to have “brain bleeds,” a term that Harvard Medical School describes as being associated with a “hemorrhagic stroke.” But like all the other news outlets covering his death, there was no official cause of death reported.  Read more >>
Posted by Anthony Derek Catalano at 6:50 AM