Govt defends record on crisis response after ‘attack’ from Davis 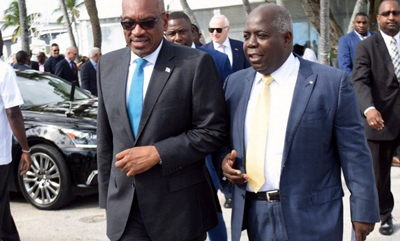 Progressive Liberal Party (PLP) Leader Philip Brave Davis has been “attacking” the government “for his narrow self-interest” during the COVID-19 pandemic, the Office of the Prime Minister said on Wednesday, adding that Davis has not been interested in “the hard work of governance”.

The OPM’s comments came after Davis released a statement claiming that public confidence in Prime Minister Dr. Hubert Minnis has decreased as a result of “unfair applications” of COVID-related restrictions, including lockdowns, which, Davis said, are “killing small businesses and hurting Bahamian families”.

Davis also called on the government to put money on the ground by supporting the local economy and to upgrade hospitals and clinics and testing capacity.

However, according to OPM, Davis’ “continued failure of substance and support puts all Bahamians at risk”.

“This is a time when we should be coming together as one, not issuing false, misleading statements,” it said in a statement.

“The leader of the opposition’s statement released earlier today is sadly mostly fiction and the same meandering thinking has led him to continuously flip-flop as the government put in place health measures to save and protect lives.

“He has been asked to attend meetings, offer suggestions and participate as a Bahamian leader, not as a partisan politician. Sadly, the only things we have been able to count on from the opposition are partisan politics and willful misinterpretation of hard facts.  Read more >>
Posted by Anthony Derek Catalano at 7:25 AM