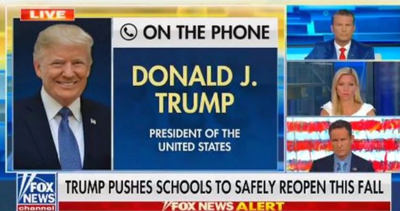 A clip from President Trump's Fox News interview was posted to his Facebook page.

Facebook and Twitter have penalised Donald Trump and his campaign for posts in which the president claimed children were "almost immune" to coronavirus.

US public health advice makes clear children have no immunity to Covid-19.  Read more >>
Posted by Anthony Derek Catalano at 5:08 AM