Crazy Brawl Breaks Out On Flight After Passengers Refuse To Wear Masks And Why Is That Guy Shirtless? 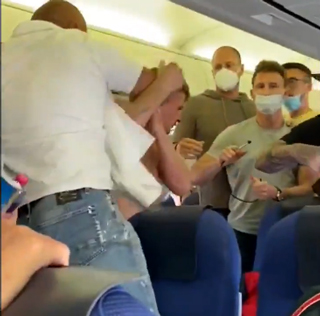 An insane brawl broke out on a holiday trip from Amsterdam to Ibiza after two passengers refused to put masks on.

“Panic and violent brawl!,” @michighclub wrote in the caption. “Unruly English passenger on board KLM flight to Ibiza, he had been drinking Gregus vodka. They refused to wear facemasks. 2 arrests were made.”

The footage shows several passengers – some also not wearing face masks – confronting the shirtless, tattooed traveler, giving him a bloody nose, before restraining him on the floor.  Read more >>
Posted by Anthony Derek Catalano at 6:48 AM