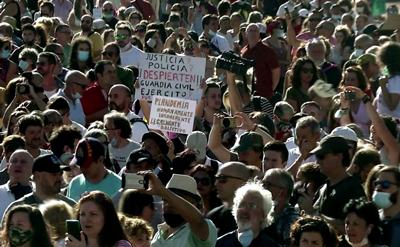 Crowds of protesters gathered in the Spanish capital on Sunday to voice their opposition the mandatory use of face masks and other measures imposed to contain the spread of coronavirus.

The mandatory use of face masks was initially introduced in May for those travelling on public transport, and was later expanded to the rest of the country.

The protest comes two days after the government introduced a swathe of new restrictions, including a ban on smoking in public.

Spain has seen a surge in new infections since lifting its three-month lockdown in late June. The national death toll stands at more than 28,600 people. View video >>
Posted by Anthony Derek Catalano at 7:50 AM