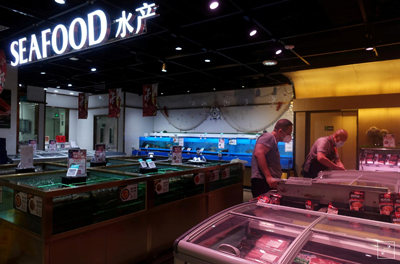 A staff member attends to a customer at a live seafood section inside a supermarket, following a new outbreak of the coronavirus disease (COVID-19), in Beijing, China June 20, 2020. Picture taken June 2020. REUTERS/Tingshu Wang/File Photo

BEIJING (Reuters) - Authorities in China have found the novel coronavirus on the packaging of imported frozen seafood that arrived from the port city of Dalian, which recently battled a surge of cases, a local government said on Tuesday.

The virus was found on the outer packaging of frozen seafood bought by three companies in Yantai, a port city in eastern Shandong province.

The Yantai city government said in a statement the seafood was from an imported shipment that landed at Dalian but did not say where it originated.

In July, customs officers in Dalian, a major port in the northeastern province of Liaoning, found the coronavirus in the packaging of frozen shrimps imported from Ecuador, and China then suspended imports from three Ecuadorean shrimp producers.  Read more >>
Posted by Anthony Derek Catalano at 7:45 AM