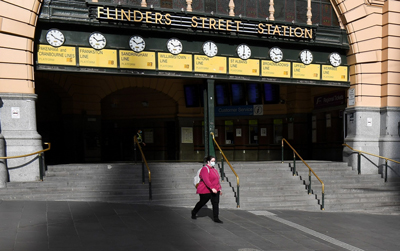 A woman walks out of a near-deserted Flinders Street Station in Melbourne on Monday after the state announced new restrictions in response to fresh outbreaks of the coronavirus.William West / AFP - Getty Images

By Linda Givetash and Reuters

Australia's second-biggest city, Melbourne, already under night curfew, announced fresh restrictions on industries including retail and construction Monday in a bid to contain a resurgence of the coronavirus.

On Sunday, the government declared a state of disaster in Melbourne, forcing nonessential businesses to close for six weeks.

The measures come as countries around the globe grapple with surging cases.

From Wednesday night, Melbourne, the capital of Australia's Victoria state, will close retail, some manufacturing and administrative businesses as part of a six-week lockdown.

The new measures are expected to double the number of jobs affected by the coronavirus restrictions to around 500,000 and along with those working from home, will keep 1 million people from moving around for work, Victoria state Premier Daniel Andrews said.