Closing schools around the world could cause a ‘generational catastrophe,’ U.N. secretary-general warns 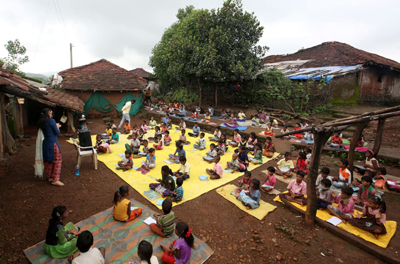 Children, who have missed online classes due to a lack of Internet access, listen to prerecorded lessons over loudspeakers, in Maharashtra, India. (Prashant Waydande/Reuters)

The world is facing a “generational catastrophe” due to ongoing school closures, U.N. Secretary-General António Guterres warned Tuesday, calling the coronavirus pandemic “the largest disruption of education ever.”

Allowing students to safely return to classrooms must be a “top priority” as countries get local transmission under control, Guterres said in a video message released early Tuesday morning.

A policy brief published alongside Guterres’s message emphasized that suppressing transmission of the virus is “the single most significant step” leaders can take toward reopening schools.

Guterres’ comments come as countries around the world wrestle with how to keep students engaged while limiting the risk of coronavirus transmission and as parents struggle with child-care challenges.

As of Aug. 2, more than 1 billion students in more than 160 countries were affected by school closures, according to data collected by the U.N. Educational, Scientific and Cultural Organization, and more than 40 million children had missed out on the “critical preschool year,” Guterres said. Countrywide closures remain in place in 106 countries.  Read more >>
Posted by Anthony Derek Catalano at 4:35 AM