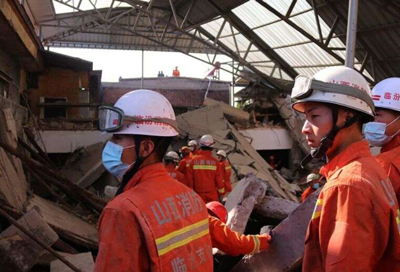 The cause of the collapse is under investigation.

The building crumbled around 9:40 a.m. Saturday in a village in Xiangfen county in the province of Shanxi, about 400 miles (630 kilometers) southwest of Beijing, China’s Ministry of Emergency Management said in a statement.

Hundreds of rescuers searched the rubble and broken slabs of concrete, using sniffer dogs, cranes, and high-tech sensors. After daylong rescue efforts, 29 people were confirmed dead and another 28 were injured, seven of them seriously, officials said.  Read more >>
Posted by Anthony Derek Catalano at 7:12 AM