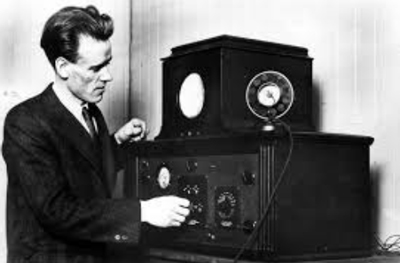 News and Views of Gregory A. Fournie

In 1907, Russian Boris Rosing and Englishman A.A. Campbell-Swinton combined a cathode ray tube with a mechanical scanning system to create a rudimentary electronic image. It wasn't until 1927 that twenty-one-year-old American inventor Philo Farnsworth invented the first television system with a transmitter that sent electronic coded images over the airwaves to a receiver which decoded the signals into light and dark. Black and white television was born.

Legend has it that when Farnsworth pitched his invention to potential investors, one of them asked him when they might see some dollars out of this thing. Thinking quickly, Fransworth televised the image of a dollar bill. Investment was there, but the Depression and World War II put commercial television production on hold. RADAR, SONAR, and information processing research took precedence over consumer televison until war's end.

The miracle of television was brought to our homes via tall broadcast towers that sent electromagnetic signals over the airwaves carrying TV programming to rooftop antennas connected to our television sets in our living rooms. The first broadcast stations in 1946 had limited broadcast hours. Hollywood Westerns dominated early programming. By 1949, most American urban centers had at least one station; by 1953, half of all American households had a television set; and by 1956, most United States cities were linked to network programming.

Broadcast signals weakened the further away from the transmitter towers. Mountains and weather could interfer with a station's reach. The national broadcasters (NBC, CBS, and ABC) needed to reach the largest number of viewers, so they concentrated on densely populated urban areas leaving people in rural or outlying areas with a weak signal or no signal at all. Cable TV began in 1948 to address the problem of providing outlying areas with an improved signal.  Read more >>
Posted by Anthony Derek Catalano at 7:00 AM