“Without help, Lebanon is going to become a failed state." 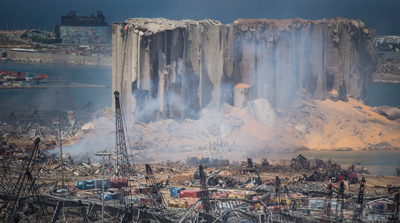 Destroyed buildings are visible a day after a massive explosion occurred at the port in Beirut, Lebanon. Photo: Daniel Carde / Getty Images.

The apocalyptic explosions that damaged half of Beirut on Tuesday would be devastating in any country. But in fragile Lebanon, a country already mired in crisis, the impact could push the country to the edge of disaster, experts warn.

Lebanon, a country of about 7 million people, has already been in the grip of a massive economic and political crisis, fuelled by a nosediving currency and the impacts of worsening coronavirus outbreak, that has prompted regular fiery protests on the streets of Beirut and other cities.

Tuesday’s disaster, apparently caused at its root by the same corruption and inept governance as caused the economic crisis, will only deepen the suffering of the Lebanese people, and fuel their anger at the ruling class, says British-Lebanese analyst Lina Khatib.  Read more >>
Posted by Anthony Derek Catalano at 5:15 AM