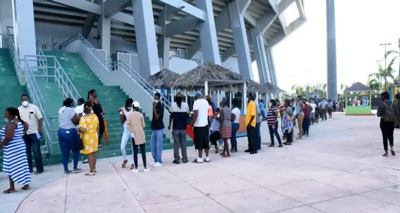 Hundreds line up at the Thomas A. Robinson National Stadium to receive their National Insurance Board benefit checks. AHVIA J. CAMPBELL

One day after promises of more organization at the Thomas A. Robinson National Stadium, some Bahamians again spent hours lined up in hopes of receiving overdue checks from the National Insurance Board (NIB) only to collect nothing.

Seaton Ferguson, 54, said he is grateful his family has been helping him because despite working for years, he hasn’t received anything from NIB since March.

“I’ve been here from 6 o’clock this morning, but I was waiting on a check from March,” he said on Wednesday.

“Other than that, my sister and family members were helping me out along the way.

“But I ain’t got a red cent from this started.”

When questioned about a number of similar claims outside Cabinet on Tuesday, Minister of Public Service and National Insurance Brensil Rolle insisted that it is only true in a small number of cases that some people have not received payments due to them from NIB for many weeks.  Read more >>
Posted by Anthony Derek Catalano at 9:51 AM