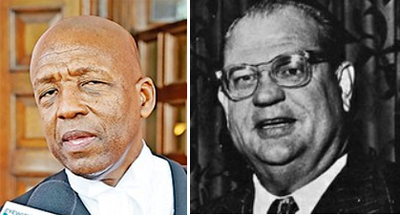 COVID-19 has created “a Sir Stafford Sands moment” for The Bahamas to transform its economy and “leap” into the 21st century, an ex-Cabinet minister argued yesterday.

Alfred Sears QC, a former attorney general, told Tribune Business that the country needed to seize a once-in-50-years opportunity to overhaul its economic “architecture” for the new global realities it will face in a post-pandemic world.

Suggesting that The Bahamas has “a fantastic opportunity to develop a number of niche industries” using its proximity to the US, including the creation of an aviation hub, farming, seafood harvesting and light manufacturing.

Mr Sears, who represents a number of web shop operators, also argued that the government could “with a stroke of a pen” boost the country’s export earnings and its own tax revenues by allowing local gaming providers to accept foreign providers while licensing their games to third parties overseas.

While advocating a full embrace of the digital economy, the former attorney general acknowledged that the economic transformation he envisages will be impossible without reliable, lower cost energy and the greater penetration of renewable sources.

He also called for a “unity government” to lead The Bahamas’ recovery from COVID-19, adding that neither of the two main political parties has a monopoly on the experience, expertise and ideas required for the task of rebuilding an economy and jobs where unemployment is presently at least 40 percent.  Read more >>
Posted by Anthony Derek Catalano at 7:14 AM