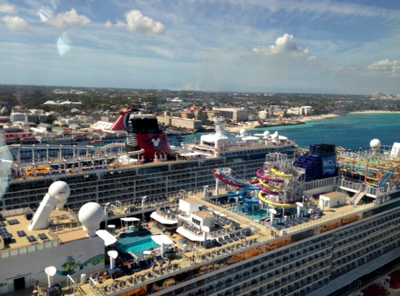 Before the shutdown, it wasn’t unusual to see numerous ships docked in Nassau at once.

It was only a year ago that officials in the Bahamas were complaining about the lack of money spent on the islands by cruise ship passengers.

Now, however, those same officials are hopeful that when cruising returns, those ships will be making a return to ports like Nassau a priority.

“They Will Want To Go to Their Private Islands”

Dionisio D’Aguilar, the Bahamian minister of tourism and aviation, told Tribune Business that he intended to “encourage” cruise lines to come back to the Bahamas once cruising resumes. “Obviously, when they start cruising again, they will not want to come to the population centers,” he said. “They will want to go to their private islands, because they can control the environment.”

He went on to say that as minister of tourism, he would “encourage [the cruise lines] to come to the population centers, because that’s where they will make the most economic impact.”

This is a major turnaround for D’Aguilar, who has spent the past several years complaining that cruise line guests don’t spend enough money.

Three years ago, he complained to the same newspaper about what he called an imbalance in the relationship between cruise lines and the Bahamas. “You’re not going to come to this destination and be greedy and get it all for yourself,” he said at the time.  Read more >>
Posted by Anthony Derek Catalano at 8:31 AM