The extremist group Al Shabab has escalated assaults in recent months, even as the country confronts a host of other challenges, including containing the coronavirus. 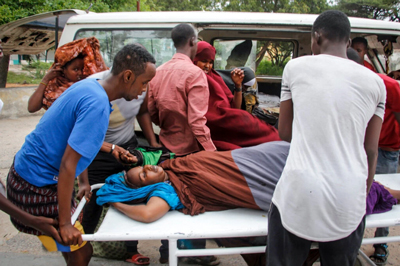 Medical workers helping a civilian who was wounded during an attack on the Elite Hotel in Mogadishu, Somalia, on Sunday.Credit...Farah Abdi Warsameh/Associated Press

MOGADISHU, Somalia — A terrorist attack on a popular hotel in the Somali capital that left at least 16 people dead, including five assailants, ended with the dramatic rescue of more than 200 people on Sunday after a raging gun battle.

The attack was the latest in a series of deadly onslaughts carried out across the Horn of Africa by Al Shabab, a militant group linked to Al Qaeda, as the group seeks to stoke chaos and undermine Somalia’s government.

The Shabab attacks have increased in recent months even as Somalia has struggled to contain the coronavirus pandemic, experienced flash floods that have displaced tens of thousands of people and been swarmed by desert locusts that threaten the food supply.  Read more >>
Posted by Anthony Derek Catalano at 7:28 AM