Atheists Now Make Up 0.1% of the Federal Prison Population 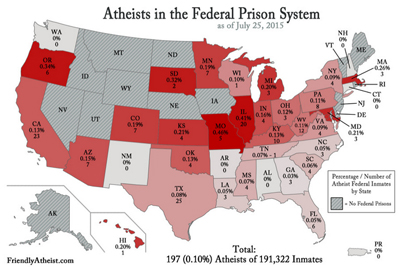 How many atheists are in the U.S. federal prison system?

Is the percentage of atheists in prison more or less than what we’d find in the general population?

And are any of those numbers actually meaningful?

Two years ago, I set out to explore those questions. I found that self-described atheists made up an astonishingly-low 0.07% of the prison population, far less than anyone expected.

Using their self-reported data, there are currently 197 atheists in federal prison out of 191,322 total prisoners. If you do the math, that’s 0.10%.

Texas is home to the most atheist prisoners, with 25 overall, followed by California (23) and Illinois (20). None of that is altogether surprising, though, since Texas and California are also the states with the most federal prisons.

Of the 135 prisons in the system, 55 have no atheist prisoners at all.  Read more >>
Posted by Anthony Derek Catalano at 6:19 AM