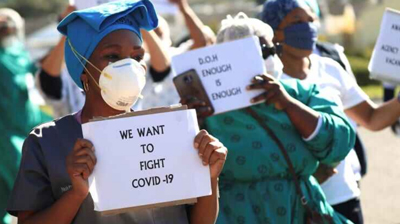 As many African nations have emerged from strict lockdown measures over the month of July, coronavirus cases have accelerated across the continent, casting doubt over the prospect of an imminent economic recovery.

The World Health Organization warned last week that Africa could be headed for a worse outbreak than the current numbers are suggesting, with total confirmed cases on the continent nearing 1 million and the true extent of the spread uncertain due to comparatively low levels of testing.

South Africa, the continent’s most industrialized economy, still accounts for more than half of all cases and the bulk of the recent rise in new infections, with more than 511,000 now confirmed. The surge has come despite President Cyril Ramaphosa having introduced some of the world’s strictest lockdown measures in late March, which were intended to buy hospitals time and were gradually eased out of economic necessity.

Concerns that health systems may become overwhelmed have led to the reimplementation of restrictions in South Africa, Kenya and Botswana, with other countries likely to follow suit in the coming weeks, according to Capital Economics Chief Emerging Markets Economist William Jackson. The Gambia confirmed Monday that three government ministers had tested positive for Covid-19, days after President Adama Barrow went into self-isolation.  Read more >>
Posted by Anthony Derek Catalano at 2:00 PM