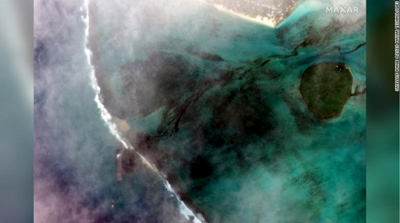 Mauritius has declared a state of environmental emergency over the spill.

(CNN) - Mauritius is facing a "state of environmental emergency" after a wrecked ship began breaking up, spilling oil into the Indian Ocean.

The vessel ran aground at Pointe d'Esny on the east of the island nation in late July, according to local media reports and environmental campaigners. This is close to the Blue Bay Marine Park reserve and a number of popular tourist beaches.

Damage to the boat has since caused it to leak out polluting waste into the surrounding area, and photographs circulating on social media appear to show thick, sticky oils coating the water and the ground.  Read more >>
Posted by Anthony Derek Catalano at 6:42 AM