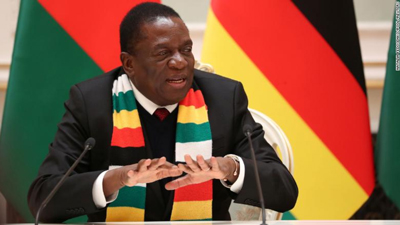 Zimbabwe's President Emmerson Mnangagwa
By Columbus S. Mavhunga, for CNN
(CNN) - Zimbabwe's government signed an agreement Wednesday worth $3.5 billion to compensate white farmers who were evicted from their land during a controversial and often violent land redistribution program in the early 2000s under former President Robert Mugabe.
"This momentous occasion is historic in many respects, brings both closure and a new beginning in the history of the land discourse in our country Zimbabwe," said current President Emmerson Mnangagwa, after signing the agreement at State House with Andrew Pascoe, the president of the Commercial Farmers Union of Zimbabwe.
"After almost 20 years of conflict over the land issue, representatives of farmers who lost their land through the fast track reform program and representatives of government have been able to come together to see a resolution of this conflict. To me this is nothing short of a miracle. For me it has been a dream that I will see this day," said Pascoe.
According to the agreement, 50 percent of the $3.5 billion would be paid with 12 months from the day of signing, while the balance is paid within five years.  Read more >>
Posted by Anthony Derek Catalano at 5:00 AM