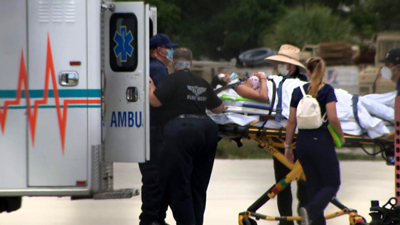 A man and woman who were injured during a boat crash in Bimini were rushed to Broward Health on Friday. (Bob Palumbo-Local 10 News)
FORT LAUDERDALE, Fla. – The U.S. Coast Guard and the Royal Bahamian Defence Force are searching for a woman who vanished on Friday in the Bahamas after a boat crash involving three other South Florida residents.
According to the Bahamian Air Sea Rescue Association, the boat ran aground at a high rate of speed at approximately 12:25 a.m.
Bahamian authorities found a man who had also disappeared after the boat crash near Bimini. They found him unresponsive at Turtle Rocks Cay.  Read more >>
Posted by Anthony Derek Catalano at 11:11 AM