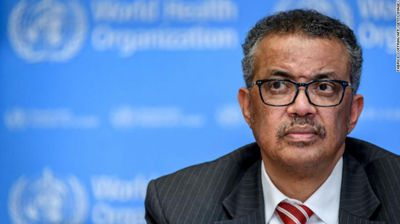 Tedros Adhanom Ghebreyesus
London (CNN) - The director-general of the World Health Organization has condemned a "lack of leadership" in fighting the coronavirus pandemic and made an emotional plea for global unity, as cases soar in multiple countries and the world struggles to contain the devastating virus more than six months after it was first identified.
"My friends, make no mistake: The greatest threat we face now is not the virus itself," Tedros Adhanom Ghebreyesus said in a passionate speech in Geneva on Thursday. "Rather, it's the lack of leadership and solidarity at the global and national levels."
His intervention will be seen as a thinly veiled swipe at leaders including US President Donald Trump, who has waged a public battle against WHO while failing to suppress the world's worst Covid-19 outbreak in his own country.
"This is a tragedy that is forcing us to miss many of our friends, losing many lives. We cannot defeat this pandemic as a divided world," Tedros said, his voice trembling as he spoke.  Read more >>
Posted by Anthony Derek Catalano at 9:26 AM