What happens when cruise ships retire 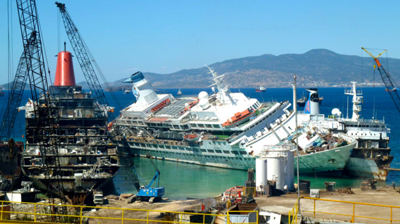 Final destination: Freelance cruise journalist Peter Knego took this photograph at Aliaga ship breaking yard in Turkey. In the center is the former Pacific Princess cruise ship, from the 1980s TV series "The Love Boat." Courtesy Peter Knego
By Francesca Street
(CNN) — Hundreds of cruise ships usually traverse the world's waters, but right now -- with the cruise industry on an indefinite hold due to the coronavirus pandemic -- they're mostly laid up at sea with no passengers.
Last month, cruise giant Carnival Corporation announced plans to remove at least six cruise ships from its fleet, with 23-year-old Costa Victoria earmarked for demolition.
When the cruise industry tentatively restarts, it'll likely be on a smaller scale -- and vessels that were once star players could end up bowing out early.
But what happens when a cruise company decides to retire a ship?  Read more >>
Posted by Anthony Derek Catalano at 9:32 AM