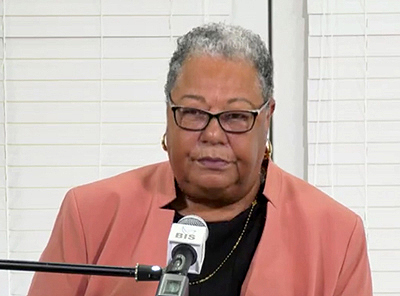 Dr. Merceline Dahl-Regis
By Jasper Ward
The spike in COVID-19 cases on Grand Bahama appears to be the result of Bahamians traveling to the United States and bringing the virus back home with them, said Dr. Merceline Dahl-Regis at a Ministry of Health press conference yesterday.
Ten new cases were confirmed on Grand Bahama between July 8 and July 14; one of whom is hospitalized.
Dahl-Regis, special medical consultant to the Office of the Prime Minister during the novel coronavirus pandemic, confirmed two of those cases.
The borders for international travel were fully opened July 1.
Grand Bahama had previously gone 63 days without a new case.
Dr. Frank Bartlett, who heads Grand Bahama’s COVID-19 task force, yesterday said more than 80 contacts have been identified from eight of the island’s latest COVID-19 cases, noting that over 200 people are currently quarantined on the island.
Prior to these cases, the island had not reported a new case since May 5.
During a Ministry of Health press conference, Bartlett provided a detailed breakdown for eight of the 10 cases on the island.  Read more >>
Posted by Anthony Derek Catalano at 9:04 AM