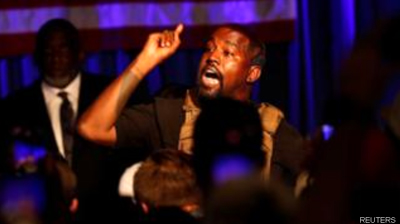 West addressed the crowd without a microphone.
Kanye West has officially launched his campaign for the 2020 US presidential election, with an unorthodox rally in Charleston, South Carolina.
West, 43, is running as a candidate for his self-styled "Birthday Party".
At the event, the rapper seemed to make policy decisions off-the-cuff and made several rants, including on abortion and on abolitionist Harriet Tubman.
Fans have questioned whether his last-minute bid for the White House is actually a promotional stunt.
The Charleston rally did little to clarify whether his run is genuine. But a now-deleted tweet sent from West's account on Saturday, appearing to show the song list for a new album, added to the speculation.
The event, held at a wedding and conference hall in the city, was said to be open to registered guests only - but West's campaign website had no function for people to register or RSVP.  Read more >>
Posted by Anthony Derek Catalano at 8:55 AM