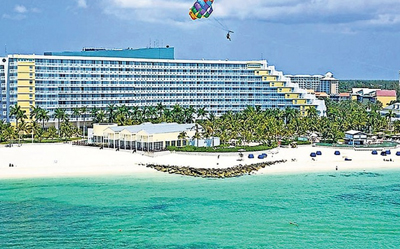 The Grand Lucayan resort in Grand Bahama
By NEIL HARTNELL
Tribune Business Editor
nhartnell@tribunemedia.net
A major obstacle to the Grand Lucayan’s sale was this week eliminated by the Supreme Court’s denial of an injunction bidding to block the terminations of around 175 staff.
Michael Scott QC, the hotel’s chairman, told Tribune Business it was “business as usual” as he and the Government attempt to close the property’s sale to the ITM Group/Royal Caribbean joint venture by month’s end.
He blasted the legal action launched by the Bahamas Hotel Managerial Association (BHMA), which represents around 63 Grand Lucayan middle managers, as “a monumental waste of time, misconceived and a further attempt to burden the Bahamian taxpayer” who has likely invested at least $100m in the hotel’s acquisition and upkeep to-date.
However, Obie Ferguson, the union’s president and attorney, told this newspaper that Justice Petra Hanna-Weekes had also determined the BHMA raised a sufficiently strong case that needs to go to full trial.
While confirming that the BHMA’s injunction application had failed, Mr Ferguson said it now planned to pursue a claim for wrongful and/or unfair dismissal on behalf of its terminated members on the basis that Lucayan Renewal Holdings, the special purpose vehicle (SPV) that owns the resort on the Government’s behalf, had failed to consult with it before making the cuts.  Read more >>
Posted by Anthony Derek Catalano at 8:26 AM