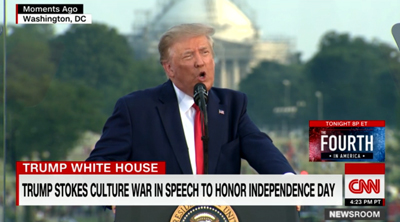 US president Donald Trump
Analysis by Maeve Reston
(CNN) - As the nation marked a somber Fourth of July with many Americans confined to their homes amid an alarming rise in coronavirus cases, President Donald Trump used his stage on the White House's South Lawn Saturday to put forward a mystifying -- and dangerously misleading claim -- that 99% of coronavirus cases in America are "totally harmless."
The President's assertion without evidence about the virus was his latest attempt to minimize the threat of the coronavirus as it ravages the United States with cases rising across the country, and as an increasing number of top Republican officials from the nation's governors to members of Congress pleaded with Americans to redouble their efforts to curb the spread of the virus, warning of the dangerous consequences if current trends continue.
Looking to distract the nation from the frightening spike in Covid-19 cases and America's grim death toll as it surpassed 129,000 people, Trump has plunged deeper into a racially charged strategy meant to bolster his support among White Americans who feel threatened by the cultural change sweeping America after the death of George Floyd at the hands of a Minneapolis police officer.
To that end, he reprised many of the racially divisive lines from his speech at Mount Rushmore Friday night, where he claimed that a left-wing fascist mob is trying to "end America" by erasing the nation's history and indoctrinating its children. Apparently hoping to top Friday night's inflammatory language, he compared his crusade to defeat "the radical left" to the efforts by the United States to eradicate the Nazis.  Read more >>
Posted by Anthony Derek Catalano at 6:48 PM