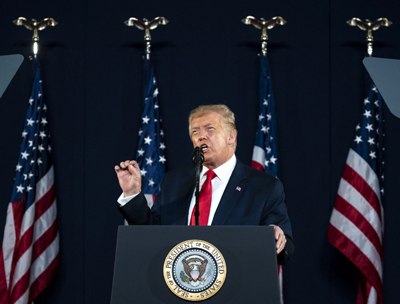 President Trump speaks during an event at Mount Rushmore National Memorial in Keystone, S.D., on Friday. Bloomberg via Getty Images
By Suzanne Nuyen
On the eve of Independence Day, President Trump celebrated at the foot of Mount Rushmore National Memorial in Keystone, S.D., with a fireworks display and an impassioned speech against what he called a "new far-left fascism."
About 7,500 attendees won an online ticket lottery sponsored by South Dakota's state tourism department. Despite the recent surge in COVID-19 cases in the country, crowds in red, white and blue were seen packed close together and mostly maskless. South Dakota Gov. Kristi Noem told Fox News ahead of the event that while free masks would be provided, attendees would not be required to wear them or to practice social distancing.
Trump opened his speech by denouncing the protesters who have called for the removal of Confederate monuments and statues nationwide that have honored Americans who have supported or benefited from slavery. The movement has stemmed from nationwide protests for racial equality following the police killings of George Floyd in Minneapolis and Breonna Taylor in Louisville, Ky., and the killing of Ahmaud Arbery in Georgia.
The president called the movement a "merciless campaign to wipe out our history, defame our heroes, erase our values and indoctrinate our children."  Read more >>
Posted by Anthony Derek Catalano at 11:06 AM