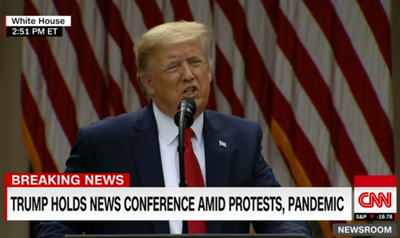 US president Donald Trump announces withdrawal from WHO.
(CNN) - The Trump administration has notified Congress and the United Nations that the United States is formally withdrawing from the World Health Organization, multiple officials tell CNN, a move that comes amid a rising number of coronavirus cases throughout the Americas in the last week alone.
Sen. Robert Menendez, the top Democrat on the Senate Foreign Relations Committee tweeted the news Tuesday.
"Congress received notification that POTUS officially withdrew the U.S. from the ⁦‪@WHO⁩in the midst of a pandemic. To call Trump's response to COVID chaotic & incoherent doesn't do it justice. This won't protect American lives or interests—it leaves Americans sick & America alone," he wrote.
A State Department official also confirmed that "the United States' notice of withdrawal, effective July 6, 2021, has been submitted to the UN Secretary-General, who is the depository for the WHO."  Read more >>
Posted by Anthony Derek Catalano at 4:04 PM