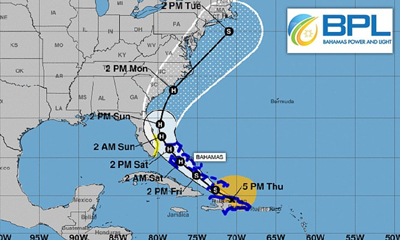 Iasias, projected path
SAN JUAN, Puerto Rico (AP) —
Tropical Storm Isaias knocked out power and caused flooding and small landslides across Puerto Rico and the Dominican Republic on Thursday as forecasters predicted it would strengthen into a hurricane while moving toward the Bahamas and U.S. East Coast.
The storm's maximum sustained winds of 60 mph (95 kph) turned several streets into fast-flowing rivers and toppled trees and some telephone and electrical cables in Puerto Rico, which is still recovering from previous hurricanes and earthquakes.
Isaias was centred about 250 miles (400 kilometres) southeast of the southeastern Bahamas late Thursday afternoon, according to the U.S. National Hurricane Center. It was moving northwest at 20 mph (31 kph), and its centre was forecast to move near the southeastern Bahamas by early Friday.
Tropical storm warnings were issued for the Turks and Caicos Islands and portions of the Dominican Republic, Haiti and the Bahamas, as well as for the east coast of Florida from Ocean Reef to Sebastian Inlet.  (source)
Posted by Anthony Derek Catalano at 6:30 PM