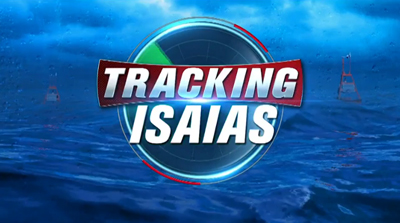 By Associated Press
Tropical Storm Isaias formed in the Atlantic Ocean on Wednesday evening prompting forecasters to issue a tropical storm warning for several islands in the Caribbean.
The U.S. National Hurricane Center said Isaias was centered about 155 miles (249 kilometers) south of Ponce, Puerto Rico, and about 265 miles (426 kilometers) southeast of Santo Domingo, Dominican Republic. It had maximum sustained winds of 50 mph (80 kph) and was moving west northwest at 20 mph (32 kph).
The government of the Bahamas has upgraded the tropical storm watch for the central Bahamas to a tropical storm warning and has issued a tropical storm watch for the northwestern Bahamas.  Read more >>
Posted by Anthony Derek Catalano at 7:36 AM