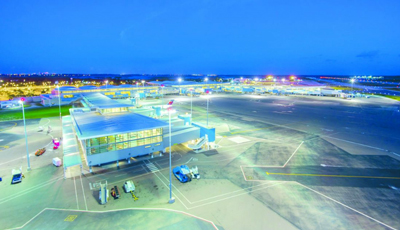 Passengers arriving at the Lynden Pindling International Airport were escorted into quarantine.
By Rachel Scott
Arriving passengers from multiple flights from Grand Bahama and Fort Lauderdale yesterday evening have been taken to a government quarantine facility, Deputy Chief Medical Officer Dr. Delon Brennen confirmed last night.
The government has released no statement or order giving effect to such a move.
Around 10 p.m., Brennen said he could not confirm how many people are being placed into government quarantine as they were still being processed.
Asked for specifics about why they were transferred to quarantine, he said this was a mandate from Cabinet and he could not speak to that.
Commissioner of Police Paul Rolle also said he did not have details on the number of flights or passengers involved, but confirmed that he was asked by the Cabinet Office to assist in escorting passengers arriving at Lynden Pindling International Airport (LPIA) into quarantine.
Rolle declined to say which facility is being used for government quarantine, but the government has in the past used Breezes Resort.  Read more >>
Posted by Anthony Derek Catalano at 9:39 AM