Time We March And Be Outraged: Pm’S Wife Calls For Public Response To Help Cut Shootings 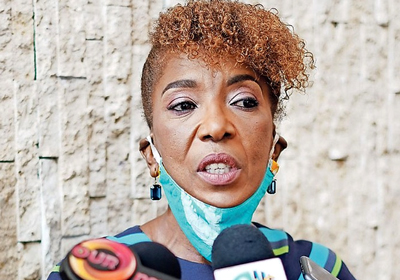 Patricia Minnis speaking to the press on Thursday. Photo: Terrel W Carey Sr/Tribune Staff
By EARYEL BOWLEG
ebowleg@tribunemedia.net
PATRICIA Minnis said the community should be “outraged” and march in the wake of recent shootings that have wounded young children.
Mrs Minnis, wife of Prime Minister Dr Hubert Minnis, was asked about children getting caught in the crossfire - following last week’s shooting of a two-year-old girl and the death of a ten-year-old girl from gunfire.
“We need to be outraged about that,” said Mrs Minnis, who heads the Office of the Spouse.
“There’s a lot of things that we seem to be outraged of but that is so important for all of the community to gather. We need to march for this. We need to really tell our young men who are killing themselves and who are killing innocent people to stop. They have to stop because they don’t want it happen to their mother, their sister.”
She added: “This child was being held by her grandmother in her lap when she was shot and... (that could) be your mother, your daughter and so we have to get to them and stop them. And by every which means we have to get to them.”  Read more >>
Posted by Anthony Derek Catalano at 9:13 AM