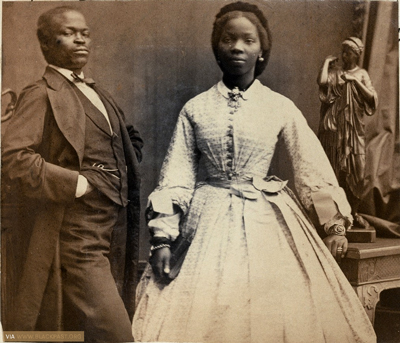 image via www.blackpast.org
By Emily Chandler
In history, she is only known as Sarah Forbes Bonetta, but this was not the birth name given to the girl who was sold into slavery at the age of 4, and in a remarkable twist of events, became a goddaughter to the Queen of England. This beautiful young black woman, dressed in full Victorian costume, offers an alternative glimpse into our whitewashed narrative of history.
Her parents were tribal royalty of the Egbado clan, but they were killed in a brutal raid on her village; victims of the notorious slave trading monarch King Gezo of Dahomey. Sarah was captured and facing certain death at the King’s Court when her fate suddenly changed with the arrival of a British captain in the Royal Navy. He had been sent on behalf of Queen Victoria to convince King Gezo against the enslavement his own people. Negotiations were hollow, although Gezo did offer a gift “from the King of the Blacks to the Queen of the Whites”– and that was Sarah. Captain. The “gift” was accepted and Frederick E. Forbes was tasked with the delivery of Sarah to the Queen. Forbes gave the child his own surname and added the “Bonetta” after his ship, the HMS Bonetta.  Read more >>
Posted by Anthony Derek Catalano at 12:11 PM