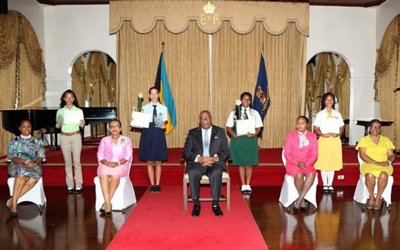 The students are pictured standing in the Ballroom of Government House with the Governor General, and AKA executive members (seated), July 9, 2020. The students are, from left: Gerri Summers, Kaitlyn Burrows, Poojah Krishna, and Antonia Ferguson. (BIS Photo/Letisha Henderson)
Governor General His Excellency the Most Hon. Cornelius A. Smith, in a courtesy call, met with outstanding high school students who were identified by the Alpha Kappa Alpha Sorority for special awards.Winning the ‘Resilience Award’ was Gerri Summers of Queen’s College, formerly a student of Forest Heights Academy, Abaco.
Miss Summers was pre-selected to represent Forest Heights Academy, however following the devastating impact of Hurricane Dorian she was forced to relocate to Nassau where she was gifted a full scholarship from Queen’s College allowing her to complete high school. She is recognized for her tenacity and perseverance during a very difficult time in her life.
The ‘Honours Day Internship Award’ by BRON Ltd. (STEM – Science,
Technology, Engineering & Math) was given to Antonia Ferguson of Nassau Christian Academy. Ms. Ferguson, who is interested in Marine Biology, has been awarded a two-week paid internship with BRON Ltd., a coastal engineering company. The ‘Family Island Award’ was given to Kaitlyn Burrows of N.G.M. Major High School, Long Island.
The organization began inviting Family Island students to participate in the event in the mid-1980s. By 1992, an award was established to recognize the most outstanding Family Island student.
The ‘Linda Higgs-Swann Valedictorian Award’ was presented to Poojah Krishna of Queen’s College, and Kaitlyn Burrows of N.G.M. Major High School, who tied for the top award and will share the scholarship awarded by the organization.  (source)
Posted by Anthony Derek Catalano at 10:44 AM