America is sleepwalking toward economic catastrophe

“The cliff is totally visible in front of us”: The future is grim if Congress doesn’t act on the economy. 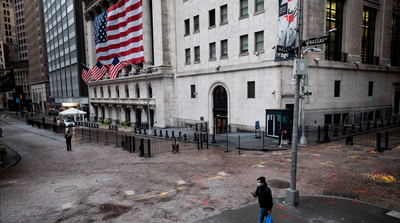 A man walks past the New York Stock Exchange on April 30. Due to the coronavirus pandemic, millions of people in the US have lost their jobs and businesses have closed across the country, leading to nationwide economic distress. Johannes Eisele/AFP via Getty Images
By Emily Stewart
The country is ambling toward a cliff, putting millions of Americans’ lives and livelihoods in danger and all but ensuring prolonged economic distress nationwide. It didn’t have to be this way. Yet here we are, unable to shake out of it.
The Covid-19 pandemic tossed much of the US economy into disarray earlier this year. Millions of Americans lost their jobs, and businesses across the country closed their doors as part of a planned shutdown. In March, Congress passed the CARES Act, an ambitious $2 trillion stimulus package to try to stop the bleeding. The plan was to buy the country time to get the virus under control and begin to safely reopen to get the economy on track to recovery.
But things have not gone according to plan. Amid reopenings, coronavirus cases are spiking across the country, and many states and cities are reversing course. There are signs the recovery that was happening is dissipating. And now many of the measures that kept so many American households afloat in recent months are about to come to an abrupt end. It’s not clear what, if much of anything, Congress and the White House plan to do about it.
“It could be cataclysmic,” said Angela Hanks, deputy executive director of the progressive group Groundwork Collaborative. “I don’t think there’s any way to overestimate what happens when you have a pandemic worsening, not improving, when we have an economic crisis that’s intensifying, and frankly, there’s no response.”  Read more >>
Posted by Anthony Derek Catalano at 9:16 AM