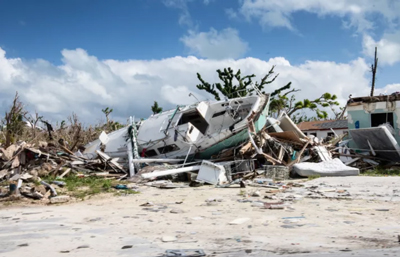 While Hurricane Dorian knocked out the Bahamas' banks for months, the cell network was back up in days. (Paul Dempsey/Shutterstock)
The Bahamas’ central bank said it is “progressing” toward the full launch of a mobile phone-based digital currency (CBDC) it’s betting can withstand the battering of a Category 5 hurricane.
Last September, the Bahamas struggled to rebound from Hurricane Dorian’s $3.4 billion devastation, in part because the storm, the largest in Bahamian history, had decimated the islands’ physical banking and payments systems.
Some Bahamian banks and ATMs remained offline for months, the central bank said in its Sunday report.
“Mobile phone coverage, by contrast, was generally restored within a few days after Dorian,” it said.
The central bank believes it can fast-track future recoveries by building CBDC functionality into mobile phones. It projected this could help ease critical post-disaster recovery tools such as receiving insurance claims.
“The Dorian aftermath demonstrated one major benefit: rapid payments system restoration after a disaster,” the central bank said.
It also noted a mobile phone CBDC can eliminate some pandemic-era pain points, such as queueing at a bank and physically exchanging currency.
The central bank’s CBDC effort, known as Project Sand Dollar, is currently in the testing phase on the island of Abaco.  (source)
Posted by Anthony Derek Catalano at 8:26 AM