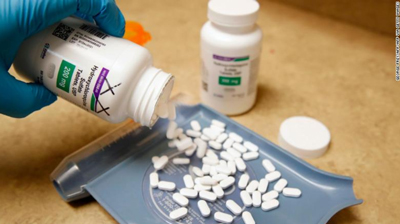 By Maggie Fox, Andrea Kane, and Elizabeth Cohen, CNN
(CNN)A surprising new study found that the controversial antimalarial drug hydroxychloroquine helped patients better survive in the hospital.
A team at Henry Ford Health System in Southeast Michigan said Thursday its study of 2,541 hospitalized patients found that those given hydroxychloroquine were much less likely to die.
Dr. Marcus Zervos, division head of infectious disease for Henry Ford Health System, said 26% of those not given hydroxychloroquine died, compared to 13% of those who got the drug. The team looked back at everyone treated in the hospital system since the first patient in March.
"Overall crude mortality rates were 18.1% in the entire cohort, 13.5% in the hydroxychloroquine alone group, 20.1% among those receiving hydroxychloroquine plus azithromycin, 22.4% among the azithromycin alone group, and 26.4% for neither drug," the team wrote in a report published in the International Journal of Infectious Diseases.  Read more >>
Posted by Anthony Derek Catalano at 7:37 AM