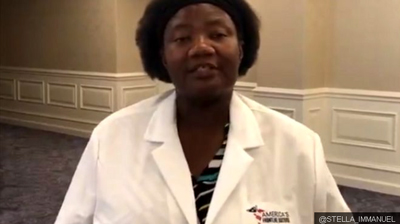 Dr Stella Immanuel is also a Christian pastor and founder of a church in Houston
By Dickens Olewe BBC News
Stella Immanuel, a doctor at the centre of a controversy over unproven and potentially dangerous claims that an anti-malaria drug can treat Covid-19, is no stranger to conspiracy theories.
She is also a pastor and the founder of Fire Power Ministries in Houston, a platform she has used to promote other conspiracies about the medical profession.
Her sermons are available on a YouTube account set up in 2009.
Five years ago, she alleged that alien DNA was being used in medical treatments, and that scientists were cooking up a vaccine to prevent people from being religious.
Some of her other claims include blaming medical conditions on witches and demons - a common enough belief among some evangelical Christians - though she says they have sex with people in a dream world.
"They turn into a woman and then they sleep with the man and collect his sperm… then they turn into the man and they sleep with a man and deposit the sperm and reproduce more of themselves," she said during a sermon in 2013.  Read more >>
Posted by Anthony Derek Catalano at 6:53 AM